Request a demoSign inSign up for free
Know DhiWise

DhiWise vs. Supernova: Which Platform to get your App Development Journey On Track? 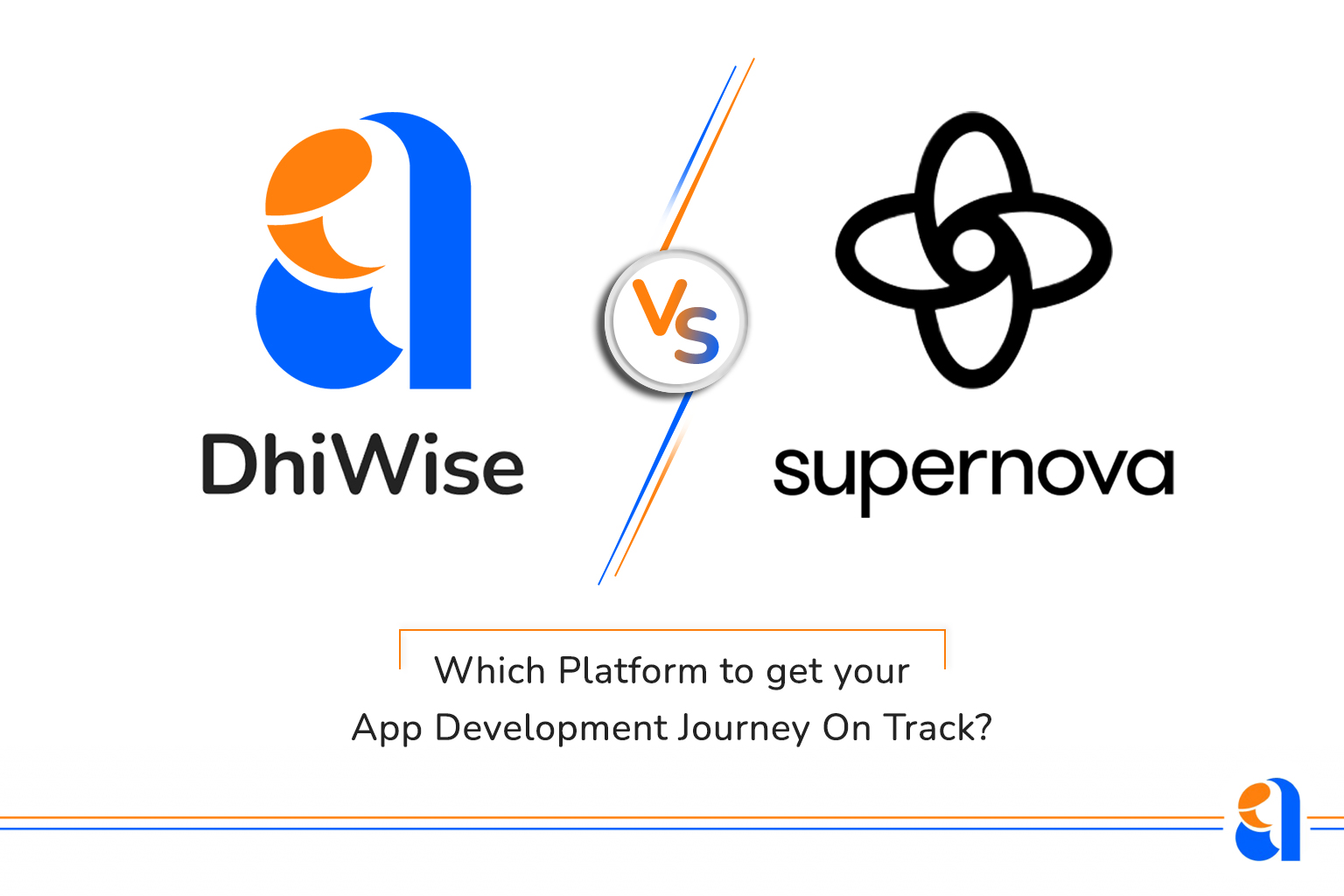 Design and development are usually disparate app development specializations. And this compartmentalization is the reason why different tooling and resource allocation exists for bringing these two concepts together. What ensues is jaded app development that doesn’t respond particularly well to deadlines.

But then, it’s 2021, and platforms like DhiWise and Supernova have quite clearly discerned the partially productive app development space, along with the challenges that exist. Both these state-of-art app development resources allow you to bring a certain level of automation to the overall design process, whilst making the entire UI/UX designing approach relatable to the developers, via ready code.

Yes, you read that right! Put plainly, these intuitive platforms help you churn out ready code for the entire design system, by identifying visual components, flows, and other elements to perfection.

But what if you only have one app to build, right away where the focus needs to be on maximizing innovation. Well, for that DhiWise is the way to go.

Well, wait! Do not take our word for it and instead take a look at how we pit every feature that Supernova offers against DhiWise and decide accordingly.

It’s all about Pro ‘Coding’ the Future

The devil is in the details. Well, at least if you are into app development. For starters, let’s understand SuperNova a tad better before speculating anything. More than an app builder, SuprNova is the perfect place for the designers and developers to collaborate for building cross-platform front-ends.

Yes, just the front-end is what you get with SuperNova. While it is still a great bet for individuals who are looking to speed up things, it is in no way a complete app development platform. It’s just a great way to speed up the design-development collaboration.

But with DhiWise, you get access to ProCode, which is a handy app development resource that doesn’t only handle the design-related aspects of the app. Instead, DhiWise lets you work on the front-end, backend, APIs, logic, and almost everything else, while being entirely forthcoming with the code itself.

Mere conjecture! Well, read along to know why DhiWise outwits Supernova at every step of the way:

SuperNova is all Flutter and Dart. This means, even though you can prep up native apps pretty well with relevant design-specific functionalities, the hybrid aspect of development still takes center stage.

Flutter, without a doubt, offers a lot of flexibility but is it enough if you have more scalable requirements? Food for thought, isn’t it?

Well, let’s look at DhiWise now. When it comes to the framework, DhiWise brings home Android, iOS, and Hybrid app builders. And from Android and iOS, we do not mean a cross-platform resource that bends both ways. DhiWise offers Kotlin and Swit-backed native app building functionalities that let you create native applications for specific app store

Now let’s jump into SuperNova’s territory, i.e., Design-to-Code, while keeping DhiWise out of the equation for now. Despite being in familiar territory, we realized that SuperNova identifies 10 to 15 components per design when it comes to creating a code view or documentation of the concerned design system.

DhiWise, however, takes the design-to-code concept far more seriously by offering a more efficient algorithm to identify the maximum layout components possible. If you have a penchant for specifics, DhiWise algorithm or rather the code generator can efficiently identify close to 50 layout components, with accuracy.

You get the code, then what? With SuperNova that’s pretty much it as the Boilerplate Utilities are more or less restricted to the design system. This means, you only get the relevant source code for the partially or completely identified design. Everything else, starting from APIs, database management, actions, and more need complete development acumen.

With DhiWise, things are a lot different, as DhiWise GUI lets you work on the entire application hands-on, whilst offering the complete, production-ready source code in the process. And if you look closely, the code quality, structure, and schema are easily the best in the business with DhiWise focusing on clean code generation over everything else.

Let us now address the elephant in the room, i.e. the ease of developing an actual application. With SuperNova, you still need to manage other aspects of the code once you have a head start in terms of code availability.

DhiWise, however, ensures that you get what you pay for as you can integrate RESTful APIs, manage specific actions, work with the backend, and even set conditionalities, with a new logic builder in play. To sum it up, DhiWise is and will be the ultimate app development solution as it doesn’t beat around the bush with its functionality and gets the actual job done.

And on top of all that, DhiWise lets you in on database access courtesy of Firebase integration to ensure that your app comes out as a complete, detailed, and responsive one.

Well, if SuperNova doesn’t support holistic app-building it shouldn’t even cover authentication, right? Yes, that is exactly what it does or in this case, doesn’t. DhiWise, on the other hand, allows you to integrate social authentication, credential validation, and Biometric authentication, depending on the type of application you plan on building.

First of all, DhiWise shouldn’t be confused with SuperNova or any other fancy app-building resource in the market. DhiWise offers a lot more than just code generation or allowing you to build no-code apps that are mere non-scalable resources without any ability to transcend to subsequent versions.

Instead, unlike the likes of SuperNova, Bubble, and more, DhiWise approaches app-building to kingdom come and allows you to work on every core and even logic-based functionality with perfection. And, if you simply want to get design-to-code, DhiWise already has a plugin for you that sends the production-ready code directly to your Email ID.

And guess what, you can still choose the framework you want the code to support, for keeping up with the native app development scenario. So, if just a plugin lets you do all that, why would you need to use an entire platform for design documentation and code generation?

Exactly, you wouldn’t! So if you haven’t tried DhiWise yet, it’s time to build your first app on this platform and experience ingenuity, hands-on.