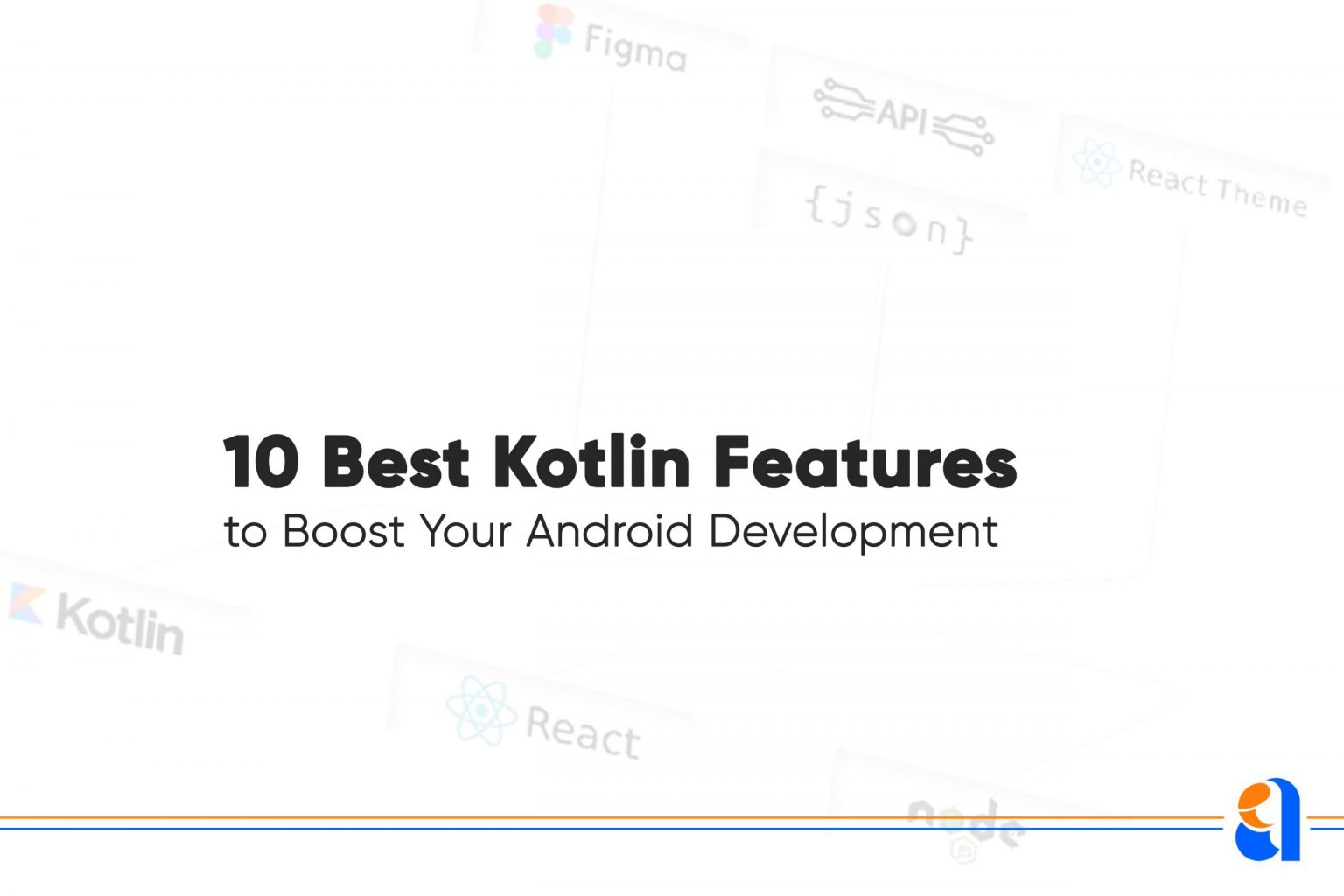 The Kotlin programming language has a lot of great features. In this article, we will look at the top ten Kotlin features.

Kotlin is the cross-platform, general-purpose, open-source programming language developed by JetBrains. It is fully interoperable with Java.

According to Stack Overflow, Kotlin is the 4th most loved language among the developer’s community, and it is the preferred language for Android development.

Google announced first-class support for Kotlin on Android in addition to the existing languages – Java and C++ – at Google I/O/ 2017. Google also announced Kotlin as its preferred language for Android development on May 7, 2019.

In this article, we are going to uncover the top ten Kotlin features to boost Android app development. So let’s get started!!

In Kotlin, the higher-order functions and lambda expressions are stored as objects. As a result, allocating memory to the function objects, classes, and virtual calls may result in runtime memory overhead.

The use of the inline keywords ultimately requests the compiler to not allocate memory and simply copy the inlined code of that function at the calling place.

Therefore, Inlining the higher-order functions and their lambda argument body to the call-site reduces the runtime memory overhead induced by the lambda functions and function references.

With this approach, no anonymous classes and functions reference objects will be created during runtime. If the body of the function type is not declared in the call site it will not be Inlined.

Also, it is possible to pass inline parameters to another inline function; it can be invoked inside the inline function but cannot be instantiated into a function type reference.

In contrast to Java, Kotlin allows you to provide custom implementations for the predefined set of operators on user-defined types.

You can overload unary, binary, and relational operators in Kotlin. All these operators have predefined symbolic representations. The overloading of operators can be done through the member functions or the extension function. The operator modifier precedes these functions. Also, in Kotlin, there are standard functions for each type of operator.

DSLs(Domain-specific language) is some kind of “mini-language” used to describe the construction of a specific part of an application. It is used to extract the part of code to make it reusable and easy to understand.

For example, if you want to reuse the Kotlin code for a particular task, DSL will use Kotlin and build something on top of it that can be reusable and understandable.

Kotlin is a statically typed language, its syntax is loved by the DSL community, and we can use the JetBrains IDEs such as IntelliJ IDEA or Android Studio for intelligent code completion. All these features of Kotlin are beneficial for DSL.

In short, with Kotlin you can easily Build DSL to remove lots of boilerplate code and hide the internal implementation from the users.

Delegation is defined as granting authority or power to the person to carry out different tasks. Similarly, Kotlin provides the language support for delegation using Delegation properties.

This feature allows you to create and implement properties only once and then use them continuously to delegate other code work in the application.

Delegation is the design pattern where an object or property delegates the task to the other helper object instead of performing the task itself.

In the code below, a property name in our Demo class delegates the logic for getter and setter to DelegateHelperClass(), so anything after that keyword satisfies the conversion for the property delegates to act as a Delegate.

The classes are created to hold data. In such classes, some standard functions are often derivable from the data. In Kotlin, these types of classes are called data classes.

There is no best practice in Java for distinguishing between its classes, so developers must recognize the data class based on its structure and patterns indicated in the code. Furthermore, the Java compiler recognizes these classes as being similar to others.

Especially in Android development, implementing such data classes is a widespread and repetitive task and therefore can increase the probability of mistakes and errors. While in Kotlin, the provision of separating data classes from common classes not just eliminates errors but also gives Android developers a massive amount of self-generated code and reduces the number of lines of code.

kotlinx.coroutine is a library for coroutines in Kotlin developed by JetBrains.

Coroutines are lightweight threads that can be used almost free. However, creating multiple threads is expensive to perform the heavy tasks of long-running computations that consume too much memory.

Prevents the main thread from becoming stalled as a result of long-running tasks for heavy computations.

Allows the suspended function to be called from the main thread, providing main safety.

The most common drawback of any programming language including Java is accessing a member of null references that will throw NullPointer Exceptions at runtime and sometimes cause application failure or system crash.

Kotlin’s type system is designed to eliminate the jeopardy of null references from the code, also popularly known as the Billion dollar mistake.

The safe call operator executes any action only if the reference has a non-null value; otherwise, it returns a null value.

The range is the collection of finite values, which are defined by the range endpoints. Kotlin lets you easily create ranges using rangeTo() function from the kotlin.ranges package using,

Kotlin range consists of a Start, a Stop, and a Step. The start and stop are inclusive in the range, and Step is by default 1.

Other programming languages, including Java, require explicit type casting on variables before accessing their properties. However, there is a feature in Kotlin called smart casting that tracks conditions within the if expression.

Singleton is one of the simplest software design pattern that guarantees a class has one instance only to ensure thread safety. For example, a single DB connection shared by multiple objects is much cheaper than creating separate DB connections for every object.

Kotlin is still a Young language, and there are many experimental features on which the work is going on. Nonetheless, it is the most loved language among Android developers. The reason is, its large development community, and it eliminates most of the boilerplate code.

“If you love Kotlin and plan to build your next application with it, try DhiWise and save your time and sanity!”

DhiWise has revolutionized the way Kotlin builders build their apps. DhiWise Kotlin Builder enables you to build apps faster so that you can complete your month’s work in just weeks.

With Kotlin Builder you can,

And new things are on their way. Sign up now!!