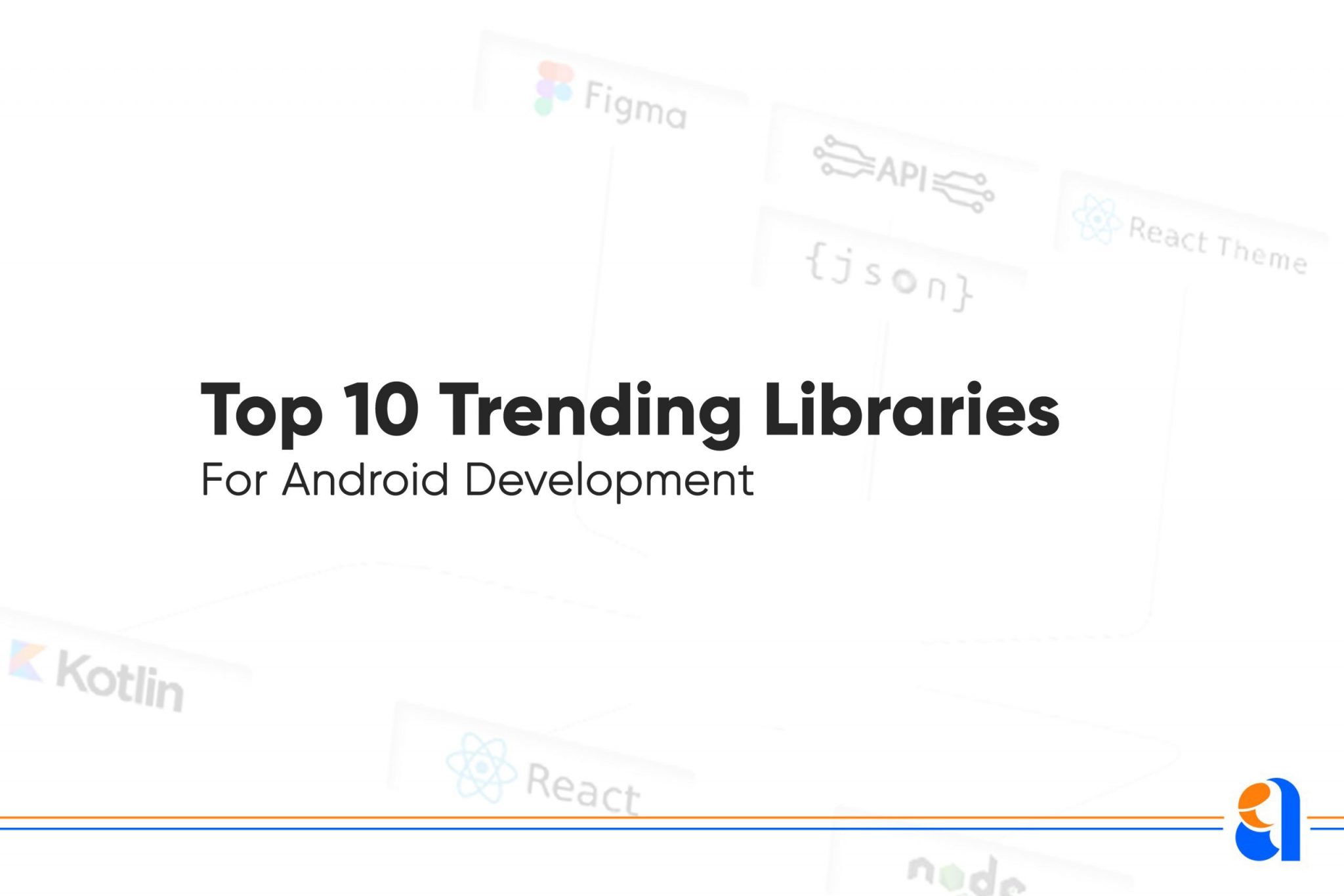 Building an Android application is a difficult task, but having a good understanding of various libraries, frameworks, and toolkits can make your Android development easier. Here we are going to see the top 10 trending libraries that can help you to build android applications faster.

With Google’s announcement of first-class support for Kotlin at Google I/O in 2017, Kotlin has become the most preferred language for Android development after Java. When talking about the Android development libraries, frameworks are an inseparable part of the discussion as they play a major role in faster app development.

In this article, we are going to focus on the top 10 libraries for Android(Kotlin) app development. So let’s get started.

If you have experienced an app crash or freezing screen while using any app, it’s most likely due to the main thread being blocked. The problem can be avoided by making asynchronous calls.

Asynchronous or non-blocking programming is the need of today’s app development for a better user experience. Through suspendable computation, Kotlin coroutines assist developers in avoiding blocking the main thread.

Kotlin supports asynchronous programming using coroutines at the language level, and it delegates most of the functionality to the kotlinx.coroutine library.

JetBrains created the library, which provides multiplatform support for Kotlin coroutines. It contains a number of high-level coroutine-enabled primitives, including launch, async, and others.

If you want to use coroutines in your Android(Kotlin) project, add the following dependency to your app’s build.gradle file:

Also, make sure that you use the latest Kotlin version. For more details about Kotlin Coroutines, refer to Github.

Dependency Injection (DI) is a technique that allows a dependent object to be created outside of the class and made available to the class in a variety of ways.

DI helps to maintain the level of abstraction among the classes, keeps your application components loosely coupled, and also simplifies code testing and inheritance so that developers can write clean and concise code.

There are several approaches to managing dependencies in Android development that use dependency injection. One of the most popular approaches is Koin. Koin is a lightweight DI framework for Kotlin developers, written in Kotlin and it does not generate boilerplate code.

Koin uses a module function to create dependencies, as shown in the code snippet.

Here the function module is used to create a module in Koin, which would be used by Koin to provide all the dependencies.

The single is used to create a singleton that can be used as a singular instance throughout the app. Similarly, the factory provides the definition, which will create a new instance each time you ask for this definition.

The get() function is used in the constructor of a class to provide the required dependency. For more details about Koin, refer to the Koin website.

Anko is a Kotlin library maintained by JetBrains. It accelerates and simplifies the development of Android applications. It is lightweight and enables developers to build clean applications. Anko is a combination of the first two letters of {An}droid and {Ko}tlin.

The Library consists of four Diverse Mode that includes:

Here is UI which is written with Anko DSL

It is the best library that you must use for making your app development faster. For more information about Anko, refer to Github.

It is extremely difficult to deal with images when developing an Android application as its API is not optimized for smooth performance.

This problem can be solved by an open-source, fast image-loading library, Glide. Its API is flexible with extensive decoding pipelines and automatic resource pooling.

Glide allows you to retrieve, decode, and display video stills, images, and animations. It allows developers to plug in the network stack.

Glide uses a custom HttpUrlConnection based stack in the default mode that includes a versatile API to help developers to connect to almost any network stack. For more details, refer to Github.

Performing network operations is a common task for every application. Retrofit is the type-safe HTTP client built by Square Inc for Java and Kotlin applications. It simplifies authentication and interaction with the API.

Retrofit creates an abstraction layer over the HTTP calls and automatically generates complex code files. It is designed to simplify endpoint declarations, i.e. how a request is created and sent to the server and how the response is read and parsed.

It takes the responsibility of data serialization and deserialization of JSON reactions and directly returns POJO. In short, Retrofit is a very powerful library that can make the most problematic API easy to use.

While managing and accessing the SQLite database, the developer needs to write too much boilerplate code. Writing such repetitive code is time-consuming and increases the likelihood of errors.

Therefore, it is essential to find a way that will not only save developer time in writing too much code but also access data quickly. This problem can be solved by persisting data locally.

An application that deals with a large amount of structured data can benefit greatly from persisting data locally, and the Room database can help with that.

Room is an official Android ORM- it is based on the standard SQL syntax. It is simple to understand and implement. The following are some of its primary advantages.

Room is a part of Google’s Android jetpack project. You can get more information about Room from here.

The Espresso framework is developed by Google to write concise, beautiful, and reliable Android UI tests for Android mobile automation testing. It offers a consistent and adaptable API for automating UI tests in Android applications.

The test can be written in Java and Kotlin. With Espresso you can perform Android UI tests without the ramifications of multithreaded testing. It runs tests optimally fast and it has a highly stable test cycle. Here are some of its best features,

More information about Expresso can be found on the Android Jetpack website.

It consists of a compiler plugin that generates visitor code for serializable classes, a runtime library with core serialization API, and other support libraries with serialization format.

Ktor is officially developed and supported by JetBrains. It is the first-class citizen of the Kotlin ecosystem that means it is deeply integrated with language features such as coroutines, multiplatform support, data classes, extensibility, and so on.

Ktor is the framework that allows you to easily create connected applications such as web applications, HTTP services, mobile and browser applications.

For better user experience, applications need to be asynchronous and Kotlin coroutine is the best feature that handles this very well.

Its goal is to provide an end-to-end multi platform application framework for connected applications.

At the moment, it supports JVM client and server scenarios, as well as javascript, iOS, and Android clients. In addition, the Ktor team is working on bringing server capabilities to the native environment and client facilities to another native target. For more information, refer Ktor.io.

KMongo is a community-created Kotlin toolkit for MongoDB. It simplifies working with MongoDB from Kotlin/JVM code. It supports both synchronous, and asynchronous patterns, and also you can use coroutine with it.

The library works in conjunction with kotlinx.serialization and kotlin.coroutines. Using KMongo, your Kotlin application can easily interact with MongoDB. If you don’t use KMongo, then you need to use the Java driver for MongoDB.

In the following example, an entity is created, saved, and retrieved just using KMongo and Kotlin Serialization.

Whether you require a library for network support, image management and access, or test; you must choose a library or framework based on popularity, usability, source reliability, and code quality.

If you are struggling to find the best solution for simplified and faster app development without affecting your code quality then try DhiWise.

DhiWise is a platform that provides faster and higher-quality application development. Using its best features and technology support you can build clean and concise apps in minimum time.

With DhiWise Kotlin Builder, you can automatically generate your app source code, convert your Figma designs to Kotlin code, easily integrate API, and much more.

Further, it supports the majority of the popular Kotlin libraries to accelerate your Android app development.