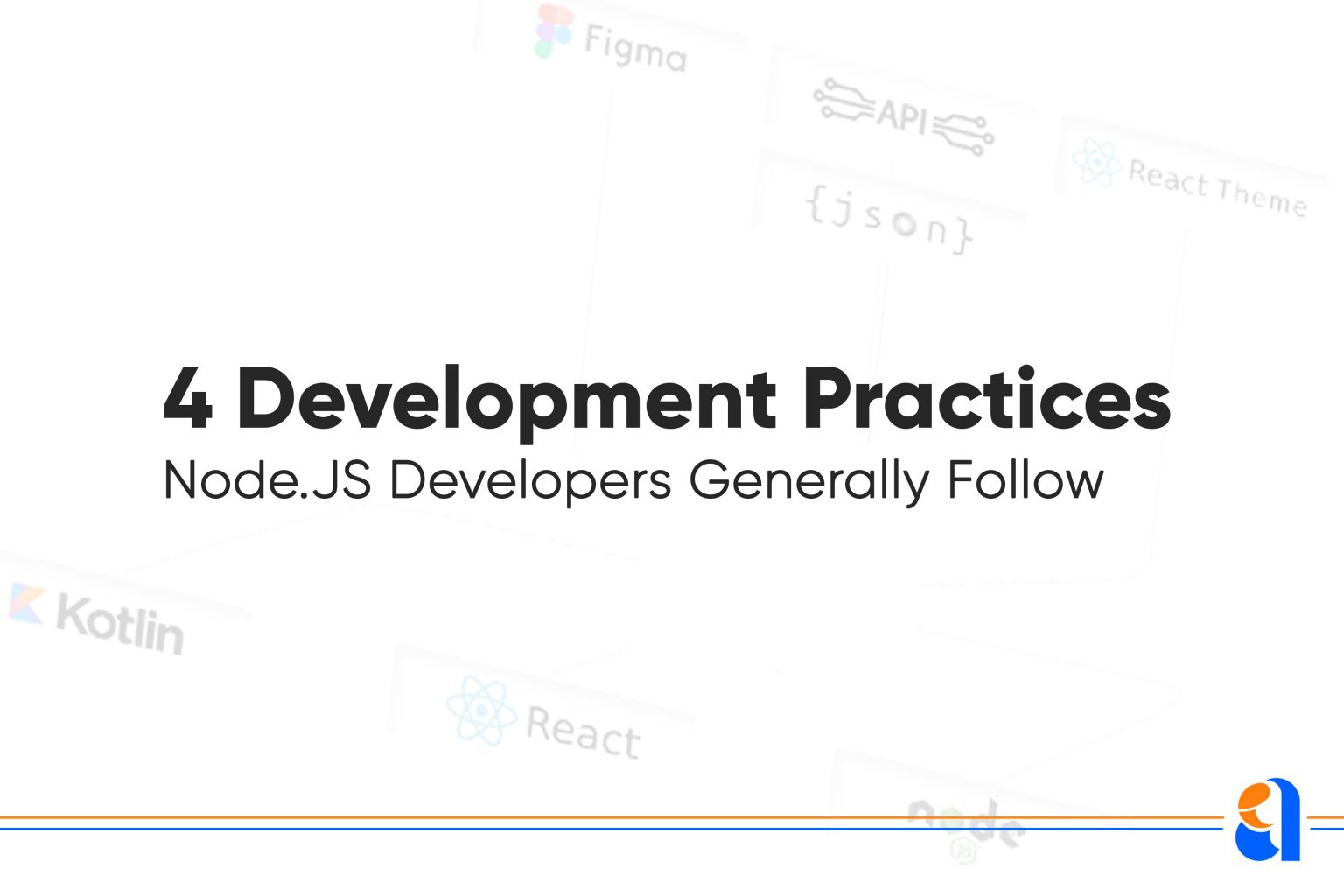 In the last decade, Node.js has become one of the most common web development frameworks.

Node.js is a common backend development language because it is asynchronous and event-driven. Since Node.js isn’t built to work with threads, you can still use multiple cores in your setting.

It has a simple syntax that even beginners can understand. Following the best practises in Node.js programming is a must when creating production-ready applications, whether you’re a novice or a seasoned Node developer.

There are numerous tutorials, documentation, blogs, and videos available on the internet that cover the fundamentals of web creation.

However, most knowledge (and importance) about best practises comes from experience, as we create more apps and struggle and succeed along the way. In this blog, all the important aspects of web development shall be discussed along with a concise list of development practices that Node.js developers can follow.

Why Does a Good Node.js App Setup make a difference?

Node.js isn’t a one-size-fits-all modern platform that’ll take over the web development environment. Rather, it’s a forum that meets a specific need. And it’s important that this is understood. On the server side, Node.js and Express.js can be used to build traditional web applications. However, while this request-response model in which Node.js carries around rendered HTML is possible, it is not the most common use-case.

One should avoid using Node.js for CPU-intensive tasks; in reality, using it for heavy computation would negate nearly all of its benefits. Node really shines when it comes to creating fast, scalable network applications because it can handle a large number of simultaneous connections with high throughput, which translates to high scalability.

» Asynchronous code for the win

‍ The callback functions in Javascript are well-known (functions that can be passed as an argument to other functions). In Javascript, they also allow you to define asynchronous conduct.

The issue with callbacks is that as the number of chained operations grows, your code becomes clunkier and unwieldy, leading to the notorious callback hell. To address this, ES 6 (ECMASCRIPT 2015) introduced the Promises API, which rendered writing asynchronous code in Javascript far simpler.

Furthermore, the async/await syntax was introduced with ES 8 (2017) to further simplify things and make the API more intuitive and normal. As a result, in a Node.js programme, one can avoid using clumsy callback functions in favor of async/await and promises-based syntax. This results in cleaner code, improved readability, and simpler error handling and testing, all while retaining a consistent control flow and functional programming setup.

» A layered approach works the best

Route handlers are call back functions that are executed when a client request is received in common Node.js frameworks like Express.js. With the level of versatility that these frameworks offer, it’s easy to fall into the trap of defining all of your business logic within those functions. If you continue down this road, you’ll find that things rapidly escalate, and your small server routes file will become a clunky, unwieldy, and messy blob of code that is difficult to read, maintain, and manage, as well as unit test.

As a result, this will be a good place to apply the well-known programming concept of “separation of concerns.” As a result, we should have different modules for dealing with various issues related to our submission. Different modules (or layers) should take responsibility for different aspects of processing a response for a client request when it comes to server-side software.

When many developers work on the same project, there will obviously be variations in their coding styles. Since programmers, sadly, are a rather opinionated bunch.

If your coding style differs from that of the previous developer on the project you’re working on, you’ll probably be tempted to rearrange the braces or replace spaces with tabs to suit your needs.

And you’ll end up wasting hours upon hours on this tedious, pointless activity that is absolutely important for your mental well-being.

Though programmers enjoy debating in their spare time which is the best style for Node programming, the decision is largely subjective. You may also refer to the Javascript coding style and specifications used by companies including Google and Airbnb, in addition to linting and formatting.

These guides cover everything from file, variable, and class naming conventions to formatting details, file encodings, and much more. This will assist you in writing high-quality code that adheres to the same practices and standards as some of the world’s best developers.

The primary aim is to improve the consistency of the code and make it easier to learn. A code linter and formatter are still present in most code setup workflows.

A linter searches for and advises about syntactically (and even semantically) incorrect code, while a code formatter (as the name implies) focuses on the more stylistic aspects of your code to ensure a clear set of formatting and styling guidelines in your project.

ESLint, JSLint, and JSHint are three of the most common Javascript linters.

The good news is that most IDEs/code editors, such as Visual Studio Code (VSCode), Atom, and others, recognise the value of writing high-quality code and provide linting and formatting plugins that are both intuitive and simple to use.

In our application, everything must have a location, and a folder is the ideal location for preserving common elements. We always want to describe a very significant distinction in particular, which leads us to our next guideline. A proper folder structure that divides various modules into different directories will realise the software’s abstract architecture. This makes it clear which functionality is handled where, and it helps us to organise our classes and methods into more manageable containers.

DhiWise is a developer-centric ProCode platform for productive and accelerated Web and mobile app growth, reducing project turnaround time by 60%.

We at DhiWise help you build top notch and good quality Node-Express.js projects using some inputs, such as database schema, authentication, paths, and constants. We specialise in our 5-framework practice:

1. Create APIs, Constants, and Policies based on the database model.

2. Make a controller and a business logic system.

3. Third-party integrations and packages should be integrated.

4. Schedulers, utilities, and documentation should all be developed.

5. Create and save the source code

Our easy maintenance and testing along with ready to employ packages like API, NPM and other utilities will give the much needed boost to your development cycle.

So, get started and be ready to go on a smooth ride soaring high with DhiWise.