DhiWise vs. Anima: Why does your App need more than just Front-End Love? 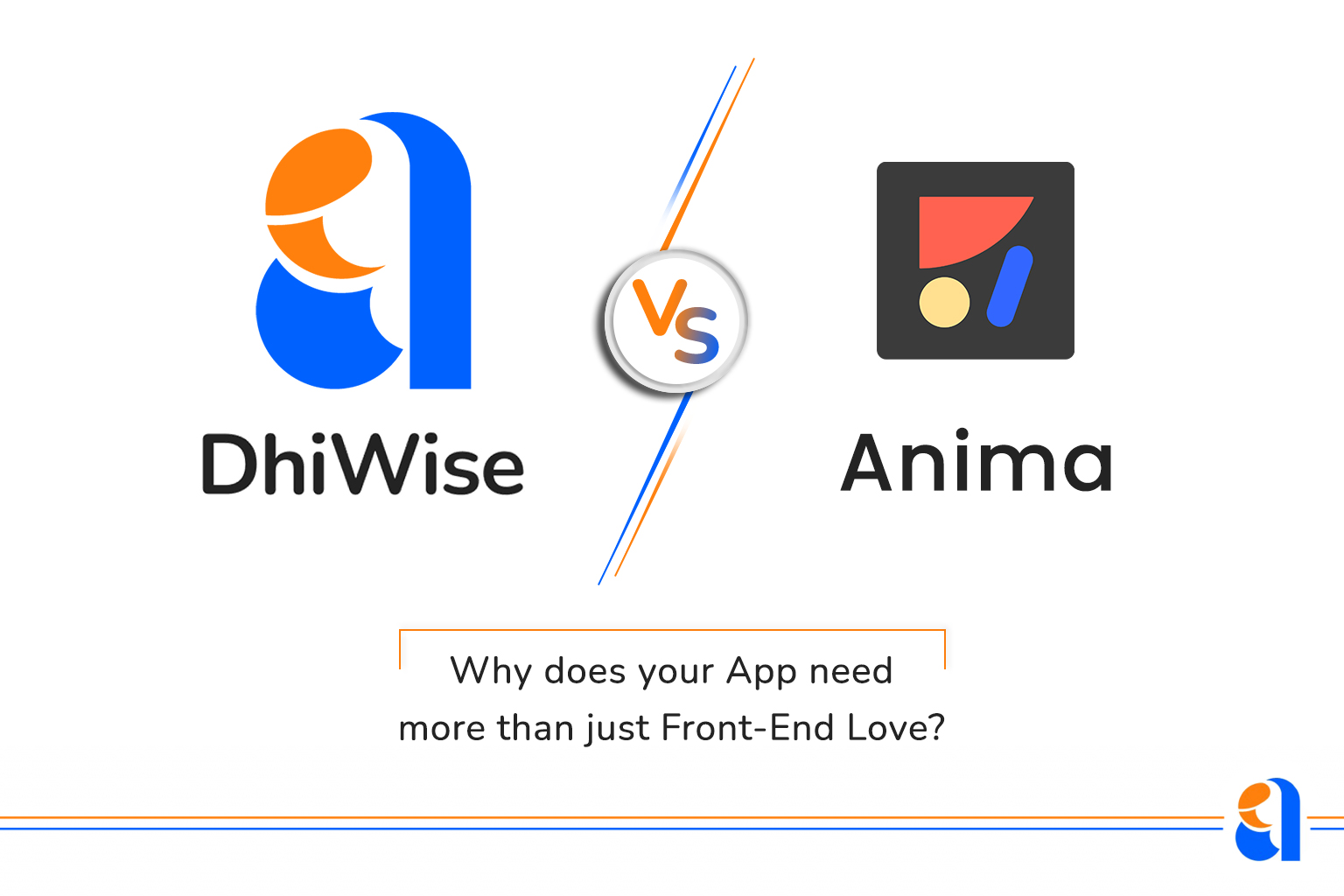 A good app is a complete app, period. As much as relatable low-code resources like Anima promise a lot of client-side capabilities like advanced design management, prototyping, and more, there is often a lot more to an application than just design and its code-level representation.

Not convinced! Take this analogy for an example.

Imagine you need to draw a portrait but you only end up crafting the outline for the same. Well, kudos for getting that far but will that be considered a complete draft. Not exactly. Well, that’s exactly what the issue is with low-code app development platforms that offer a wide range of creative hacks but end up dumbing down the app value significantly.

This is where DhiWise comes into the mix by letting you play around with the designs and UI components, much like what the Anima app promises in the first place. And yes, the design-to-code concept is also adhered to, with DhiWise focusing on delivering production-ready and also developer-friendly code. But that’s where the similarities with Anima ends.

Confused as to what more is on offer by DhiWise? Keep reading to know exactly why it is considered the world’s 1st 100% Developer-centric app development platform.

Low-Code is fun. And so is Anima. Yes, these are completely acceptable statements. But what about creating an app that doesn’t always need you to cut down on the grunt work but requires it to be relatable to a specific framework, platform, or OS. This is where you need ProCode.

A concept that lets you be flexible, allows you to toggle between front and back-end with ease, and even lets you make the web or mobile app more wholesome in every possible way.

Looking for specifics? Well here are the reasons why DhiWise hits the ball out of the park when app development is concerned:

Let’s first address the elephant in the room that involves the actual app development schema. Also, you need to establish beforehand whether you really need a fully functional application or just the front-end for the same. Well, if you seek holistic app development, Anima often sells you short. While all that front-end glitz and glory looks great to the unversed, the real-app development starts once the front-end layout is ready.

DhiWise offers a more granular development hierarchy that starts basic and lets you take every aspect of app development into account, and not just the design and layouts. Starting from APIs to authentication, DhiWise has every resource needed for holistic app development.

Let us get into the space where Anima excels over most other app development platforms, i.e. layout management and detailing. While it supports designs sourced across a wide range of tools like Figma, Sketch, and Adobe XD, it still leaves a lot to be desired when it comes to fine-tuning the components, prototyping, adding flexbox, and even breakpoints.

Anima does all right, as it can still turn static elements into navigable components, pack in live videos, and more. But where it lacks is the number of components that it can identify. At once, you can manage 5 to even 8 components before you need to migrate to a new project.

Things are different with DhiWise. Instead of being comparable with Anima in terms of layout detailing, it manages to identify close to 50 layout components to add every element and resource to the concerned application.

Not let’s delve into the area where DhiWise excels, straight and simple! As compared to Anima which lets you convert design-to-code in React, Vue, CSS, and HTML, DhiWise goes one step ahead and offers client and server-side specific technologies to help you create some actual apps.

DhiWise lets you build apps specifically for the Android, Apple, or Web ecosystem. And on top of that, with DhiWise, you can even work with backend apps, courtesy of Node.js and Laravel frameworks.

Both Anima and DhiWise are great at offering a code view of the designs. But there is a lot more to this concept than what meets the eye. Firstly, the code presented by Anima is clean but not exactly a ProCode setup. This means, the developer will only get access to the design-specific aspect of the code, which would still need him or her to work on the app logic, APIs, and other aspects, at the code level.

However, DhiWise, in reality, offers production-ready, complete source code that encapsulates and presents the core functionalities of the application. And as a developer, you simply need to build on the logic by adding a few lines here and there. Put plainly, DhiWise generated ProCode makes sure that the developer has to do less repetitive tasks while building the app.

While these are some of the reasons why DhiWise comes across as a better app development platform than Anima for comprehensive app evangelists, there are a handful of other aspects like multifaceted authentication, better boilerplate utilities, improved code layout, and process collaboration that cut.

However, discussing each aspect can get a bit overwhelming to a standard app developer and if you are one, it is better to give both Anima and DhiWise a try and see the improvements offered by the latter, hands-on.