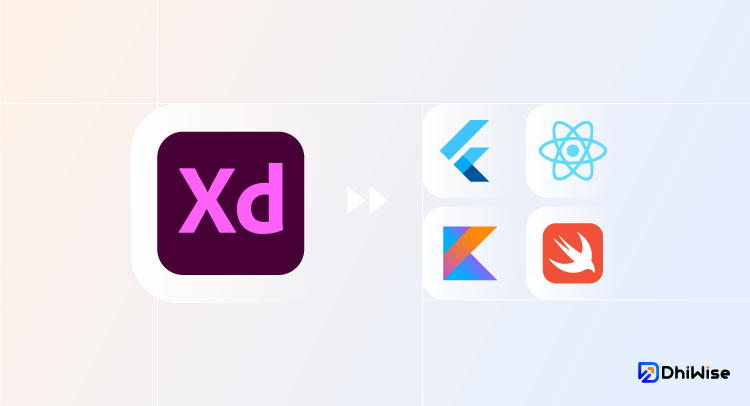 The article introduces DhiWise capabilities for design to code conversion, here you will learn how to convert:

So let’s get started with the platform overview!

An overview of DhiWise and its “Design to Code” capabilities

DhiWise is the ProCode/LowCode web and mobile app development platform that aims to empower professional developers by making the process of software development highly efficient, reliable, and effortless.

The platform supports multiple front and back end technologies for app development and provides state-of-the-art features to generate clean, scalable, and maintainable code while having full control over your source code.

As its design to code feature is a concern, DhiWise lets developers convert their Design in Figma, Adobe Xd, and Sketch to React, Flutter, Android(Kotlin), and iOS(swift) code. Also, it provides Design to code plugins for developers who just want to utilize it outside the platform.

Going from Adobe Xd to code with DhiWise

To convert your design in Adobe Xd to code, first import the Adobe Xd file inside your application on the DhiWise platform.

Follow the steps given below to import the Adobe Xd file inside your Flutter app,

1.Login to DhiWise, either with your Google or GitHub account.

2.Create a new empty application from the DhiWise dashboard.

3.Select the technology in which you want to build your frontend application- Android, Flutter, iOS, React. Here you need to select Flutter as our app development technology for the demo example.

4.Add the application name and select the type of file you want to import from the options, i.e Figma, Adobe xd, or Sketch. Also, you can try DhiWise ready-to-use templates to start building your application. Select Adobe Xd to import app design.

5.The DhiWise team will convert your Adobe Xd design file to Figma which will take a single business day and you will get a notification once the conversion is completed.

7.Get Figma URL from the Figma account: Select the design you have coveted to Figma and copy its URL from the address bar.

Now, you can select app screens and start customizing them. After finishing app customization click Build to generate the final application code. Developers can download the generated source code or sync it with the GitHub and GitLab repository for easy sharing and collaboration.

For converting the Adobe Xd to code in the following scenario go through the same steps for respective apps using the DhiWise app builders.

For converting your Adobe Xd design into React code, choose React as your frontend technology and start building an app with DhiWise web builder.

If you are building an Android application, choose Android as your frontend app development technology to convert Adobe Xd to Android code. It supports Kotlin for app development.

Working with the Apple ecosystem? Then use DhiWise iOS builder to convert your AdobeXD to iOS code. The builder supports Swift technology for app development.

Read more articles on how to convert Figma design into code.

For developers, time is the most precious thing, then why waste it on monotonous tasks when you can automate it. That's where DhiWise comes into action.

Whether you are building mobile or web applications with different technologies, it helps you to get your work done 2x faster with its unique features.

Now you know how to convert Adobe Xd design to app code (Flutter, React, Android, iOS). There are other DhiWise features that can make your app development bliss.

Know more about its features and start using it to bring better change to your app development with more efficiency and correctness.

Thank you for reading!