5 Reasons to Pick DhiWise over Bubble: And yes, 5 is still being Generous 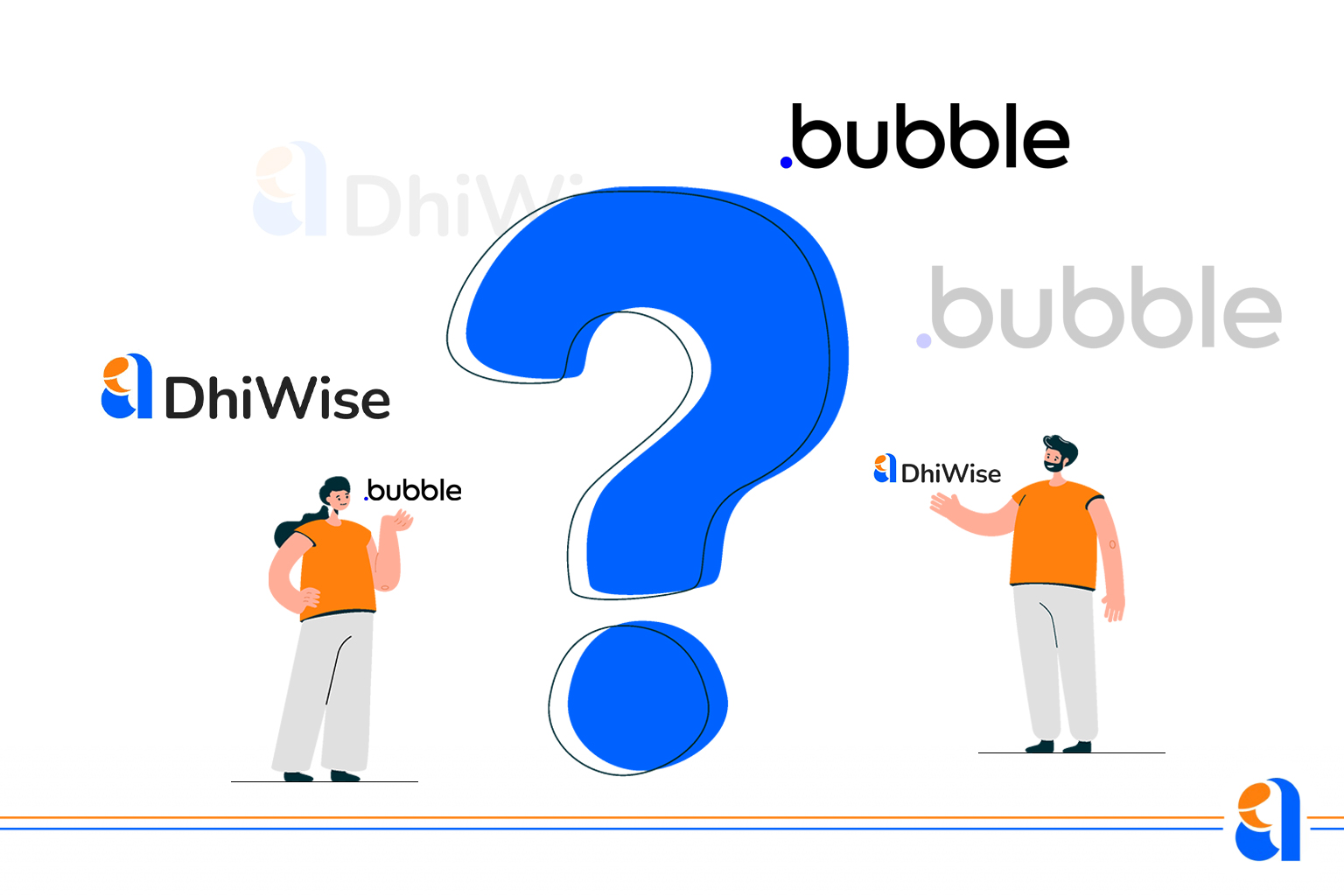 No Code sounds fun, right! Not exactly sure what good something that starts with a ‘No’ is! Well, pardon us for being cheeky here but we couldn’t help but notice the recent flocking of several misled choices around Bubble— a famed NoCode app development platform.

Bubble seems good enough to go with its codeless approach towards app development. And yes, there is a Drag-and-Drop editor to further sweeten the pot for the app enthusiasts. But why the heck are we using ‘Enthusiasts’ in place of developers. Well, there isn’t just one reason for the same.

Bubble lets you build apps like Lego models, i.e., via a Fit and Hit approach. You have a GUI, elements to set a gimmicky logic, and yes, the hosted infrastructure support for giving perspective to your application. But how seasoned, concrete, and usable would the apps be!

Not much as Bubble doesn’t let you do one major thing. That is, ‘SEE THE CODE’. And unless you know your way around the code, working on the app to build subsequent versions isn’t exactly going to be a bed of roses.

In comes DhiWise that actually and categorically caters to the developers who have put their heart and soul into learning the tricks of the trade.

And yes, if as a CTO (Chief TECHNICAL Officer) you have built most of your apps on Bubble and sharing interviews with praises for the platform, just wait for a moment when you actually need to make some logic-specific tweaks in front of a Series C investor and the ‘Bubble’ finally bursts.

Bubble has been a game-changer and there isn’t a shred of doubt about the same. It lets you develop apps quicker. Just that, the apps that you build aren’t better and ready for the long haul. And yes, you only get what you see. What goes behind the scenes eludes you forever!

DhiWise, on the other hand, lets you be in complete control of the app, and even the boilerplate plate code. Still, confused as to what that means?

Well, these 5 reasons are expected to clarify things, a lot better:

» Pick DhiWise for the ‘Tech Stack’

What kind of app do you want to create? Native, hybrid, or a web app? Well, there aren’t several choices in play if you wish to create an app on Bubble. At most, you get hold of the Flutter development framework that lets you create restrictive hybrid applications. And the worst part here is that Bubble doesn’t declare the technologies.

Instead, it expects you to revel in the glory of that half-cooked application. But DhiWise isn’t anything alike. Instead, it lets you in on a complete tech stack, letting you build native, backend, web, and hybrid apps with comparable precision.

Yet another reason to go with DhiWise, right?

» Pick DhiWise for the ‘Code Ownership’

What is code anyway? Isn’t it something that you need to type in extensively and repetitively on an IDE to develop the app? Sounds tiresome, isn’t it! It definitely is and that is exactly why Bubble has been selling its plans like hotcakes.

And why is it a bad thing? Code is an integral part of an application. While typing it can be tiring but if you cannot get the code view of the visually generated app, there is no point using it in the first place. This is exactly what DhiWise vouches for.

Sharing some of its qualities with Bubble, like the graphical interface, workflows, and more, even DhiWise lets you manage components and build an app. However, once the app is built, DhiWise hands over the intelligently generated code to you, allowing you to debug, make changes, and scale it as per requirements.

This is the sole reason why DhiWise is also termed as a ‘ProCode’ platform, which carries a lot more heft as compared to a NoCode or even a Low-Code setup.

And yes, you get the code regardless of the app type.

» Pick DhiWise for the ‘Ease of Design’

Are you planning to build yourself a nifty little client-side application? If yes, you might have to get the design on point for the UI and layout. Bubble allows you to create the design right from the scratch, via the drag and drop, pedestrian paint-like tool. In the end, it becomes virtually impossible to get every element, widget, and layout specificity on point.

DhiWise, however, lets you manage designs and bring them to the application, like a pro. If you have a dedicated team by your side, DhiWise app builders let you migrate created designs from the likes of Adobe XD, Figma, and Sketch. And if you plan on flying solo, DhiWise has app-relevant application templates and even single app screens to choose from.

Everything in place for the new and seasoned developers, alike!

» Pick DhiWise for being ‘Responsive’

Building an app as a Lego model isn’t expected to make it responsive. Eventually, it needs to connect with a local database, server via the APIs, and the collaborative workspaces to share information, requests, and responses. In the end, as a developer, you must realize the fact that users will be handling the app and they will eventually want to interact with the same, at a deeper level.

Bubble doesn’t get all that and instead promises server deployment at max. Well, it isn’t anything else but hosting the web app on a server to make it look functional. But that hardly takes care of the actions, user requests in real-time, and dynamic core functionalities.

DhiWise, on the other hand, lets you manage the entire app from the scratch, as you would on a code level. You can define models, assign REST APIs to them, define attributes, upload JSONs, set permissions, and connect the same to the server or the local database, depending on your choice of NoSQL, SQL, and Cloud databases.

To sum it up, DhiWise lets you get every basic to advanced app-specific functionality on point, without being showy.

» Pick DhiWise for the ‘Price’

Now to the financials. At a quick glance, you might be tempted to settle with Bubble’s monthly plans. But if you delve deeper, you would be surprised to know that the high-end plans set you back by over 500 dollars. And yes, this is still a monthly thing that lets you work 20 times on the app to create subsequent versions. Quite a pocket pinch, right!

DhiWise, on the other hand, has plans starting at as low as zero dollars. And trust DhiWise to offer support to one paid user, two active applications with complete workflow access, and cent percent code ownership. But that’s not it. DhiWise even has an Enterprise plan lined up for multiple users, with access to 50+ fully functional, tech-specific applications. And what’s interesting is that even the most premium plan costs a fraction of what Bubble is quoting.

Quite a compelling case in favor of DhiWise, isn’t it?

Still unsure as to which development platform makes sense to your app development strategies. Well, with DhiWise you get a pretty extensive authentication module that extends up to Biometric authentication, something that Bubble hasn’t been able to provide, yet.

And the DhiWise-powered Drag-and-Drop logic builder outpaces the Bubble workflow builder by subsequently making room for conditionalities other than If-Else.

Bubble has its takers, and we aren’t denying its place, potency, and power. If you want to show off an app without having to understand the basics of coding from the scratch, Bubble has enough firepower to have you sorted. But then, for enterprise-level applications that need to be scaled depending on the changing market, DhiWise takes center stage.

And once the app is developed, there is production-ready source code for you, as the . ENV file, to make use of, simply to take the app development outwards and towards the more conventional realm.

Overall, DhiWise, unlike Bubble, strikes the perfect balance between visual and code-specific app development that caters equally to entry-level and seasoned app developers.